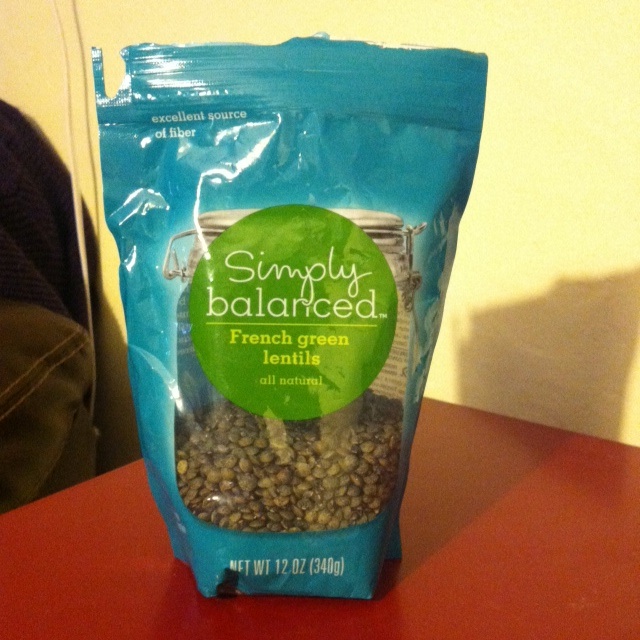 This meal brought to you by . . . a cheap bag of lentils and general lethargy.

Vacation began, for me anyway, around 2:45 last Friday afternoon. Because of (what I think will be a regular occurrence this winter) canceled after-school activities, I found myself driving Colby to his father’s house. What should have been a 35 minute trip each way turned into about an hour on slushy back roads there, and an hour and a half on frozen, dark, and unmarked roads on the way home. I can’t remember the last time I was so grateful to see the I95 sign (if only I had known people would be driving either 20 or 70 mph – we’re not much on moderation in these parts I guess).

I knew we needed groceries, but I was too tired to even THINK about entering the grocery store. I arrived home to nearly empty pantry and refrigerator, ready to resort to PBJ.  Lucky for me, I found this:

Don’t hate me because I’m beautiful and inexpensive!

This little bag is ALMOST enough to pry me from my crispy pan-fried chickpeas. Lentils are sacrilegiously easy (and healthy and delicious and cheap). After rustling up a couple of old, frozen, cracked carrots from the cold storage bin, a couple of potatoes and some onions and celery – I was in business. When Matt came home the kitchen was fragrant and steamy and smelled like I had been slaving over the stove for hours. The grand total time commitment for this gem is: 30 minutes with cook and prep time.

Soup for the Storm

Feeds 4-6 (or three with leftovers)

Do this: Rinse one cup of lentils and set to the side. Prep vegetables in largish chunks. They look nice at the end when you can actually SEE the vegetables instead of just KNOWING that they are there, mushed up in the soup somewhere. Saute one largish (a cup or over) onion and the carrots (I used three good sized ones). Once they get their sizzle on add the celery (I used three stalks) and garlic (three LARGE cloves, smashed and chopped). Once everything is tender-ish, add five cups of stock or broth (I used water and Better Than Bouillon), the lentils, chopped potatoes (I used three small ones, cubed), a large bay leaf and a healthy dose of rosemary (I probably used close to a tablespoon). Cover. Bring to a boil, then lower the temp to simmer very, very slowly. Simmer about 20-25 minutes.

*I think this is a dish you can pretty much do whatever you want with. Vary the liquid, veg, seasonings, etc. The rosemary and bay leaf, though, are indispensable.

If you over-cook this things will get a little mushy, but it will still be warm and delicious. This soup is best with the lentils JUST tender, but not so much so that they dissolve. Oh, and REMEMBER TO REMOVE THE BAY LEAF BEFORE SERVING. NO ONE WANTS TO EAT THAT.

Serve with: Bread – whatever you have in the house is fine, but buttered crusty bread is best – and grated parmesan. Your kids will want to hate it, but they probably won’t.

I don’t have pictures because 1. We ate it all and 2. Lentils, even when they look like a pretty bowl of fish eggs studded with vegetables, are still not that pretty to the rest of the world.

View all posts by frommidnightoil